The island we all know and love closes in four days, but here at Club Penguin Mountains, we’ve got some special things planned for March 29th. Today I am pleased to finally announce what they are:

March 29th is approaching fast, too fast. But let’s give the game a perfect ending, which is what we’re going to focus on in this edition by discussing the meet-ups.

In three events for the past 2 and a half years, Club Penguin Reunion has truly united the community, Last night was the final Reunion and the team, lead by Madzom8ie, have put months worth of work into making this a magical experience for all of us.

Dozens of staff members attended with notable sightings of Spike Hike, Polo Field, Gizmo and many more. There were also “famous” content-creators from old times, like Cena12121, Poonchee and Tommy234 56. Yesterday was truly magical, something hard to express in words. So here are photos instead.

CP Reunion truly reunited the community bringing loads of nostalgia and enjoyment throughout the entire evening. It was a big deal with rooms getting full two hours before the party was even officially due to begin. I’d like to thank the people who made this event possible.

The Farewell Finale happened on Friday night and it was equally as magical, but So Long CP is more than just a single meet-up. It was about giving Club Penguin the perfect ending, whether that be through a 24 hour party, camping, playing games, EPF operations and just all around having fun.

IAs with all meet-ups, it was extremely enjoyable (minus the frustrations of full rooms) with many staff members like Spike Hike making a special appearance. Here are some photos from the Finale.

It all started with a Kickoff at the end of January, we played some mini-games and won over the bots in the Penguin Playoffs, told stories at Camp Penguin, proved that a 24 hour long party can happen at CP Around the Clock, role played at Penguins at Work, saved the island in Operation Shadow and gave the game a perfect ending with the Farewell Finale.

This project has been huge. I mean, even a small movie was made. Here’s a 20 minutes animation made by Blue21102 which is extremely entertaining and exciting. The team even arranged voice actors for the multiple characters in this video! I would highly reccommend checking it out!

There are highlights of the events and more information on the So Long CP Project Page too, which you can check out!

The Club Penguin Times is very lucky to have the opportunity to speak with the person who masterminded So Long CP, Blue21102!

What was the initial idea of this amazing project?

So Long CP was born when I thought, “How do you actually tip the iceberg?”. I started asking more questions about Club Penguin and, before long, I hired a team of penguins to help me answer those questions. At the time, I had a strong feeling Club Penguin was going to end soon, so I wanted to give the community a hand by hosting all sorts of meet-ups to deliver a perfect ending.

How did you make it happen? What went on behind the scenes with the team to make the entire project such a success?

I first started this project alone. I decided to email Megg about this project and I queried about the iceberg and told her about event ideas, and even invited her to the Kickoff on January 28th. Megg had definitely boosted my confidence with this project because she replied to me and decided to get involved with CP Around The Clock. As for the Farewell Finale, I asked whether she could make it and we both agreed on combining So Long CP with their huge meet-up. She advertised it on the blog for us, which was very kind of her. Without Megg, and moderators, like Muddy Ducky, I wouldn’t have maintained such confidence in the project.

So Long CP has made a perfect ending for sure! What are your thoughts on the end of CP and the future of CPI?

I’m glad you think that! My thoughts on Club Penguin closing down? To be honest, I was rather shocked at first. I anticipated an announcement about it, but I was trying not to think about it much. Now that I have experienced Club Penguin Island, my views have changed. Club Penguin had to shut down eventually. Adobe Flash is on its way out and I am not too bothered that the team decided to end it sooner than later. It means more effort can go into Club Penguin Island – and that is what counts. The future is key and I believe the team shut Club Penguin down for the benefit of the future. Club Penguin Island seems to be doing well so far and I am always interested to see how it grows. I think it will be a success for a while but I find its future unpredictable. All I wish for is the best!

I just want to say thank you for being a supportive friend. You have attended a lot of the events and I am so glad you believed in this project. Thanks for interviewing me! 😊

I can’t believe that an idea became something as amazing as it was, but that is the magic of the Club Penguin team and community! I would like to thank Blue21102 so much for not only allowing me to ask him a few questions but also for the project itself!

The So Long CP team also cannot be forgotten: thank you so much Tripplem, Littlee37, Tomisino1, Nina1059, Madzom8ie and Daisy!

Penguins have discovered numerous glitches throughout the island

Though news has been fairly limited this week, we’ve covered a lot of things on the island. Here are the ones from the last 7 days starting with the oldest first.

Last edition I asked whether or not you would like me to host events on Club Penguin Island. 32% voted no, but 26% voted weekly and 26% voted bi-weekly. I’m still thinking, but at the moment, I am likely to hold biweekly events. Don’t forget to attend this party though!

The poll this week is: at this rate, how long do you think Club Penguin Island will last before it shuts down? Club Penguin was successful enough to last over a decade. That’s huge. I’m not sure if CP Island can do the same but what do you think?

Thank you very much for reading! Sorry about the lack of graphics in this edition. I hope you enjoyed it…and I can’t believe we’re so close to the end of Classic. Remember to make the most out of it. 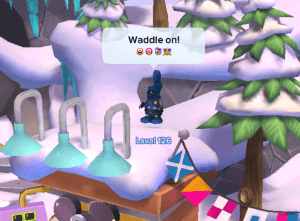